Bonus Review: Beehive Is A Rockin’ Tribute to the 60s 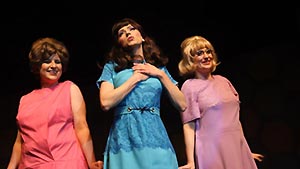 Beehive: The 60s Musical is a hair raising good time for Pollard patrons. Susan Riley serves as narrator and she takes us from 1960, with the girl groups and iconic hairdos, all the way to Woodstock in 1969. Seen through the eyes of someone coming of age during this infamous decade, Beehive shows what it truly felt like to live while this era was unfolding. Music reflected the changing times as female empowerment began to take hold. Along with Riley, Beehive stars Mariah Warren, Jennifer Teel, Stef Fortney, De’Vin Lewis and Megan Montgomery. The six ladies recreate the musical numbers of Grace Slick, Lulu, Dusty Springfield, Diana Ross and the Supremes, Tina Turner, and of course, Aretha Franklin and Janis Joplin. These artists defined a decade as well as American culture, and changed the world forever.

Each leading lady goes by her own name, and together the cast recreates perfectly stylized routines reminiscent of the 60s. Timothy Stewart directs this jukebox musical that rocks from start to finish. The wigs are elaborately crafted by Hannah Finnegan. The period costumes by Michael James are perfectly suited to each artist they represent. Louise Goldberg leads an incredible band that creates an authentic and powerful rock experience. The cast of professional actors and singers power through a host of microphone issues, but it remains the only hiccup in the production.

Mariah Warren stands bold and beautiful as she belts out Tina Turner. Stef Fortney and De’Vin Lewis bring the house down with their duet of Aretha songs. Megan Montgomery sends a shiver through the audience with her potent portrayal of Grace Slick. Riley grows as the decade continues and the women’s rights movement explodes. As feminism begins to take root, her buttoned up look gets looser and freer. Riley’s tightly bunched beehive wig subtly comes down. And as Jennifer Teel takes the stage for the closing Janis Joplin performance, the girl Riley was in the beginning is now a self-confident and empowered young woman. 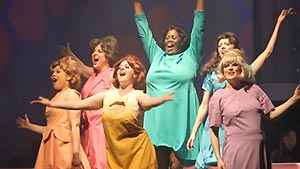 The cast of Beehive: The 60s Musical.

The nostalgia brought forth in this show is strong for anyone who remembers when these songs and artists first arrived on the scene. But it’s familiar even for those 80s babies and beyond. If you’ve ever ridden around in your parents’ car, listening to the oldies stations, you’ll recognize the songs featured here. Songs like “Me and Bobby McGee”, “It’s My Party”, “Natural Woman” “Proud Mary” and “Somebody to Love” are so ingrained in American culture, that it no longer matters what decade you were born in. Beehive: The 60s Musical uplifts women of all ages and eras and celebrates the important contributions that female artists made on the world. It’s a fun time and features rock artists the way they always should be; alive again, young always, and forever singing their hearts out on stage.

Beehive: The 60s Musical runs until May 4th at The Pollard Theatre in Guthrie. For tickets, visit thepollard.org or call the box office at 405-282-2800.