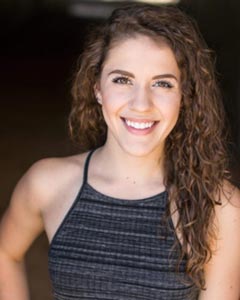 October is beginning to look a lot like the holiday season warm-up. It’s busier than ever, especially for theatre. Artists, technicians, and reviewers alike are running crazy trying to get everything covered. This writer is LIVING for the tight schedule, just focusing on one musical, and one pumpkin spice latte, at a time.

One of those theatre artists, Kat Metcalfe, understands the hustle all too well. She’s currently in a hit run of The Rocky Horror Show at Lyric Theatre as Magenta/Usherette. The demanding schedule means the cast has back to back shows on weekends, starting with the early show at 8 p.m. and another immediately after at midnight. Rocking a bright red wig as Magenta, and a sexy revealing number as the Usherette, Metcalfe, along with Eric Ulloa as Dr. Frank-N-Furter, Emily J. Pace as Janet, and Antonio Rodriguez as Brad, is killing it in the rock ‘n roll production that’s all craziness and fun. Over a lunch break at The Red Cup, she sat down with me to chat about career moves, eating Vegan, our shared passion and love for theatre, and of course, all things Rocky Horror.

Lyric Theatre produces The Rocky Horror Show every three years, and each production has a unique spin. This year’s production is based in the New Orleans French Quarter, and the costumes and accents reflect that detail. About this current run of the interactive, infamous Rocky Horror Show, she says, “Rocky Horror is different every night, because the audience is different. The cast knows the audience is going to interact and do call-outs, but every audience reacts differently. Some people are there for an early show, and don’t really know Rocky that well. Others are there for the midnight show and they’re just ready to party, and it becomes more than just call-outs. They can get REALLY into yelling at us! Then we have the really dedicated Rocky Horror fans who know every single callback, and we know when to pause to wait for those. Ultimately, we just go with the flow of it. It can get crazy, and we never know what to expect. But we remember to just do the show and whatever happens, hey, that’s live theatre and we’re here for it.” 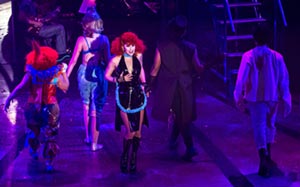 Prior to her role as Magenta, Metcalfe was also seen as Rosie in the Lyric Theatre’s World premiere musical When We’re Gone, which premiered last fall. About originating a character in a world premiere show, she says, “When We’re Gone was my first role in a professional theatre. And since it was a brand new show, that was a unique experience. Typically you get used to learning a role and there’s the goal of meeting the pre-set expectations for that character. There’s that thought of, ‘Can I do this? Can I meet this challenge?’ But with a new character, you have the ability to actually influence the show with your input and what you bring to the story. The writers can make changes, for you, as an artist, and what works for you. We were making changes constantly, up until the night before we officially opened. It was a lot to learn, but it was so much fun.”

A 2018 graduate of Oklahoma City University’s renowned Musical Theatre program, Metcalfe had a brief stint in New York City, but ultimately decided to move back here, where she grew her Musical Theatre roots. On her recent return to OKC, Metcalfe says, “I just felt like the universe was telling me it was time to come back. Everything lined up right. I spent a year moving around so much. I needed a place to land.” I think I speak for all Oklahoma City patrons when I thank the universe for leading her back here. We could say she’s “up and coming” but truly, she’s already here. A particularly vibrant presence onstage makes her not just one to watch for, but one to watch, period.

Lyric Theatre’s interactive Rocky Horror Show runs until November 2nd at their Plaza Theatre location. Stay tuned and check back here for what the future has in store for Ms. Metcalfe and her cast mates!