Another Dynamic Presentation from Lyric Theatre with “Newsies” 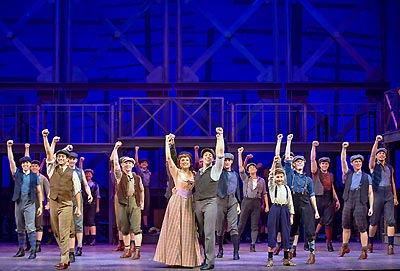 Lyric Theatre is a tremendous asset to Oklahoma City, bringing excellent theatre to Oklahoman’s gaining recognition on a national level.  Their summer productions at the Oklahoma City Civic Center Music Hall are always thrilling, staged with magic, glitz and genius level talent.  Another example of excellence from Artistic Director, Michael Baron can be seen in the latest production “Newsies” directed by Ashley Wells opening July 9 and running through July 14, 2019.

“Newsies” is loosely based on the notorious newsboy strikes taking place in New York City and the surrounding areas in 1899.  The newspapers were sold on the streets by young urchins who depended on this income to support themselves and supplement the family income.  Many of the labor practices of the era were barbaric compared to the enlightenment of today, but the child labor practices and protections were particularly abhorrent.  The newsboy strikes of the period raised public consciousness and many strides were made in the labor laws.  In 1899 John Joseph Pulitzer, Publisher of the New York World and William Randolph Hearst, Publisher of the New York Sun were engaged in an intense rivalry each trying to top the other in sensationalism and headline excitement. Pulitzer lost sight of his ‘common man’ identity as well as his common sense in the single-minded competition.  The musical “Newsies” based on Disney’s 1992 movie of the same name uses this history to create a highly entertaining story revealing the plight of New York City’s underclass and the American ideals of freedom and opportunity these young people craved.  The staged musical version is written by Harvey Fierstein with music by Alan Menken and Lyrics by Jack Feldman. 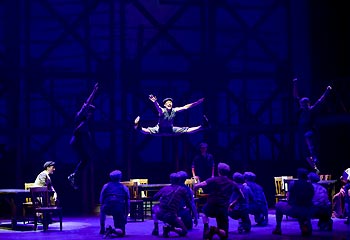 Aidan DeWitt in a spectacular leap over the newsies. Photo courtesy of K. Talley Photography

Ashley Wells, Associate Artistic Director of Lyric directs “Newsies” with her unique approach and flair.  Assembling an incredible team, Wells partners with Jan McDaniel in musical direction and Amy Reynolds Reed for choreography.  These three artists create a musical extravaganza that combines incredible musical support for vocals with amazing choreographic supremacy in dance.  Their success is due in large part to the technical support provided.  Kimberly Powers creates a beautiful and intricate scene design that, while complicated, enables movement ease and simplicity for the performers.  The lovely set looks exactly like New York City would look in 1899 as the underprivileged in the various boroughs struggle to succeed.  The scenes change smoothly as the set pieces glide effectively leaving plenty of space for the large cast of enthusiastic dancers.  The costumes by Jeffrey Meek are accurate and lovely easily worn by each actor.

The large cast is filled with very talented youngsters and is led by experienced performers of quality.  The story follows Jack Kelly, an orphaned teen struggling to survive in New York and dreaming of the west and Santa Fe.  He leads the other newsboys in striking against Mr. Pulitzer who has raised the price of ‘papes’ or newspapers that the newsboys must buy in order to sell them on the street. Mr. Pulitzer’s war with Mr. Hearst creates a battlefield in the city, and the collateral damage is becoming extensive.  Ultimately, Jack Kelly forces Mr. Pulitzer to a compromise that benefits everyone.  He is supported by his dear friend, the crippled boy, Crutchie, and friends, especially Davey, and Davey’s younger brother, the adorable Les.  Also coming to their aid is a young girl reporter whose story about their strike is effective.  She publishes under the name of Katherine Plumber and Jack Kelly is smitten.  The story is loosely based on the strike, although not factual; nevertheless it is quite evocative of the time and the environment is a truthful representation of the inner city struggles of 100 years ago. 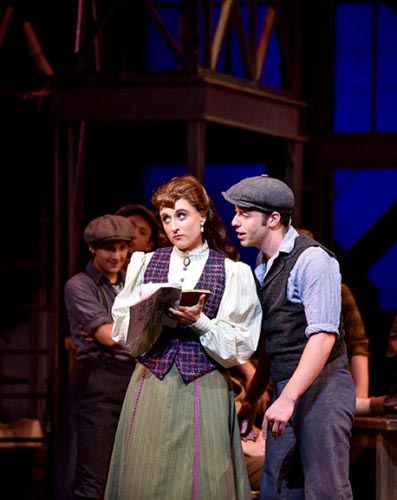 Sean Watkinson is wonderful as Jack Kelly; he has it all, the pipes, the stems, and the presence.  Of course, the singing and dancing in Lyric presentations is always flawless—but Watkinson’s charisma is captivating.  Mattie Tucker Joyner is excellent as Katherine Plumber, and she is a good match for Watkinson.  Together they make the premise believable and natural, the expert singing and dancing do not get in the way of their emotional connection.

Jimmy Mavrikes is Davey, new to the ‘newsie’ profession, he has had the benefit of more schooling than the others, and His thoughtfulness provides great support for Jack Kelly as they form the union to fight injustice.  Mavrikes has a deliberation as well as great talent that is excellent for this character, and makes his caring of younger brother, Les, very real.  Callen Miles Stewart is Les, unabashedly cute and not afraid to use it, Stewart is a child performer with a great future displaying his varied talents.

Sam Brinkley is the loyal friend, Crutchie, disabled but daring, standing by the helpful friend.  Brinkley’s talent is revealed in his poignant solo after he is taken away to the Refuge, a home for derelict boys that is no refuge at all.  M. Denise Lee is outstanding as Medda Larkin, the burlesque queen with her own theatre.  Jack paints the scenery for the theatre and she befriends and advises him with a very solid heart of gold attitude complemented by a streak of practicality evidenced in her great vocals. 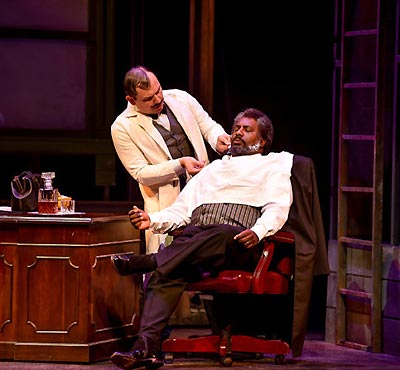 W. Jerome Stevenson as Joseph Pulitzer getting a shave at his desk. Photo courtesy of K. Talley Photography

W. Jerome Stevenson is the villain of the piece, Joseph Pulitzer. Pulitzer was actually considered somewhat of a champion of the common man and his plight, but in this story he has lost sight of humanity in his competition with Hearst. Stevenson delivers a performance that solidifies his dastardly behavior in this situation, but we see the true historical figure in his performance.  A man flawed, but ultimately good.  Stevenson’s acting ability transcends it all with miraculously excellent results.  Andi Dema is wonderful as the other villain, Mr. Snyder, corrupt administrator of The Refuge Home.  Rodney Brazil gives us a brief but memorable look at Teddy Roosevelt at his best. Vince Leseney is Wiesel, the thuggish fellow distributing the paper, as well as the kinder Jacobi with great aplomb.

These ten performers lead forty ensemble cast members in this production.  Their superb performance encompasses all levels of theatrical presentation but it is the dancing that makes “Newsies” such a phenomenal success.  Much of the credit goes to Reed’s choreography, but the talent of this cast is profound and profuse.  There are quite a few young ladies as well as many young men in this cast and they all display magnificent athleticism as well as sustaining great emotion in movement.

Forty names are too many to mention but they are all deserving of great praise.  It is evident that these young people have dedicated their lives to musical theatre; their passion is evident in every note and every leap as well as every glance and lifted brow.  Their commitment is to be commended as should be the commitment of their proud parents and teachers.

“Newsies” plays through Sunday’s matinee July 14, 2019. The Oklahoma City Civic Center Music Hall is located in downtown OKC at 201 N. Walker Avenue and their box office telephone number is 405-594-8300. Or simply call the Lyric Theatre Box Office direct at 405-524-9312.  You can also visit www.lyrictheatreokc.org for tickets and information. 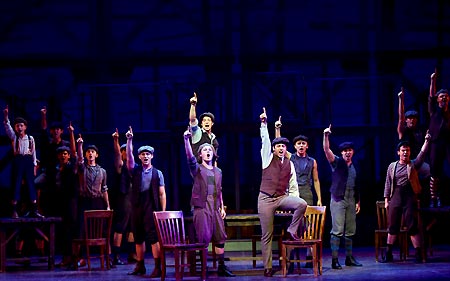 Posted in 2019, This Season | Tagged Summer at the Civic
Search
Categories