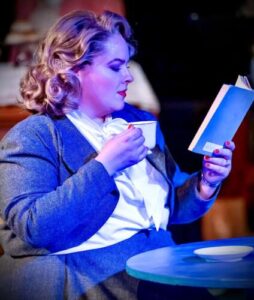 Noël Coward. Versatile, witty, brilliant and engaging, Noël Coward was an actor’s dream playwright.  The great movie “Brief Encounter” starring the brilliant stage actress Celia Johnson and Trevor Howard was directed by David Lean in 1945.  The screen play was based on Coward’s play “Still Life” a short play in five scenes.  Emma Rice has since adapted the stage play from the Coward’s screenplay of “Brief Encounter” and “Still Life” two of Coward’s greatest works.

In 2010 one of Oklahoma City’s finest performers saw the production transferred from London’s West End Roundabout Theatre Company to Broadway.  The production, directed by Emma Rice, transformed him  According to Burton’s Director’s Notes in the program:  “…It was Breathtaking.  Reminded me why I want to do what I do.  Why I act. To make art…”  So, who better to direct the show at Jewel Box Theatre in Oklahoma City than Ronn Burton?  A man with expertise in directing as well as musical directing and a versatile actor himself. 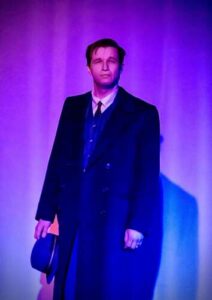 When the director loves the work and is able to inspire the cast to feel the same way about a production, it shows.  The play is set in prewar Britain telling the love story of two star-crossed lovers who unaccountably meet and fall in love in spite of their contented marriages.  The play details their meetings and their struggles with the moral taboo’s being broken as they try to contain their feelings.  Very dramatic.  But with Coward’s work, there is wit and humor in every moment.  The two lovers are Dr. Alec Harvey and Laura Jesson.  They meet every Thursday at the train station where they first encountered one another.   Myrtle is the proprietress of the railway refreshment room in the station where the two meet for tea or lunch and Beryl is the waitress.  Conductor Albert Godby is a frequent visitor for tea as he courts Myrtle and Stanley is another employee at the café who courts Beryl.  While the family of Dr. Harvey are not in the play, Laura is frequently seen at home with her kindly and patient husband, Fred, and their two children.  Alec and Laura meet openly as friends, but soon their relationship develops and, of course they are too visible to continue in secret. 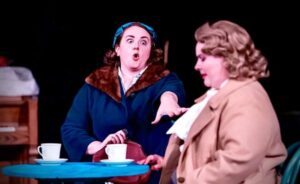 In viewing this production it is quite apparent that Burton’s cast is perfect in every way for the production.  Leah Coleman Arnold is Laura Jesson, and immediately one is struck by how much she looks like she just stepped out of 1938.  Her face is reminiscent of Linda Darnell, with some Gene Tierney and Jeanne Crain and Celia Johnson thrown in, her stance and movement reflect the times beautifully.  Jeremy Sheets is Alec Harvey and he also looks like he has stepped off the train bringing the fog of London with him.  These two set the mood beautifully.  Character development is pure and the portrayal of each lover is realized with believability and natural grace. 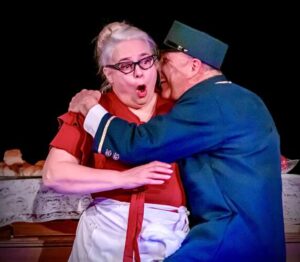 David Fletcher-Hall is Albert Godby the conductor who drops by to court and tease Myrtle played by Zaneen Fletcher-Hall.  These two are fun characters, and are clearly having lots of fun with their roles, skillfully employing their talent and British humor.  Korri Werner is delightfully amusing as Beryl the waitress being courted by Stanley.  Stanley is played by Maxwell McIntire and these two also bring a great deal of humanity to their roles.  In the poignant scenes when Laura is at home with her husband, but clearly far away in her dreams, her husband Fred is ideally played by Jacob Velders.

The remaining cast have essential roles and some of the smaller roles are taken by both Fletcher-Halls, Werner, McIntire, and Velders.  They are joined in equally excellent performances by Taylor Loomis, Maddie Wall, John C. Arnold and Marti Bessinger. 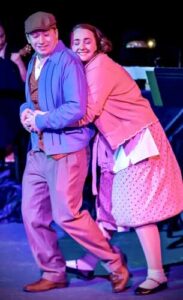 Burton is assisted by the efforts of dramaturg, Anna Holloway and Whitney Hendricks as production manager along with an excellent crew providing superb lighting and sound along with costumes and props and creative set.

“Brief Encounter” plays at Jewel Box Theatre’s great location at the Disciples First Christian Church at 321 NW 36th Street in Oklahoma City, just a stone’s throw from the old Jewel Box location.  The show runs from February 3 through February 20 with an 8:00 pm curtain evenings and a 2:30 Sunday matinee.  For information visit the website at www.JewelBoxOKC.com or Facebook page at Facebook.com/JBTheatre.  Or simply call 405-521-1786 the number in everyone’s address book for over half a century.  The box office is manned Tuesday through Friday from 1:30 to 5:00 pm with friendly old-fashioned human interaction.  Don’t miss this show!  It is a brilliant example of the talents of Noël Coward and later, Emma Rice.  It is also an example of the incredible Oklahoma talent and dedication of Ronn Burton and his superb cast at Jewel Box Theatre. 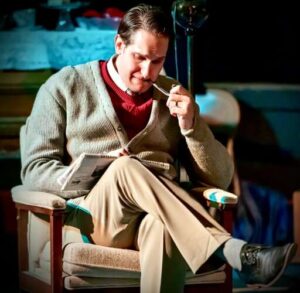 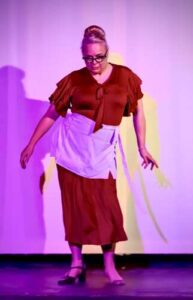 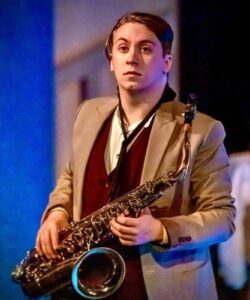