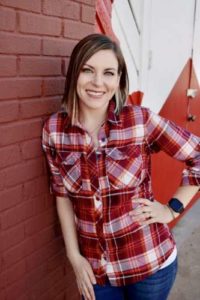 Hello! I’m Adrienne, the Managing Director of Oklahoma Art Scene and Hurd. I just graduated with a Master’s Degree in Aerospace Administration & Logistics from Southeastern Oklahoma State University in Durant. It has NOTHING to do with theatre, but it’s helped me in all aspects of my writing! I started with Scene and Hurd in 2017. The first show I reviewed was a directed reading of “Bathrobe Club” by Adam Davies. The first full production I reviewed was Sam Shepard’s Ages of the Moon at Carpenter Square Theatre, and it’s still one of my favorites! I loved the quiet dialogue, the dynamic and history between the two characters, the eclipse, and the ceiling fan! It was such a quiet yet deep story. It’s hard to remember all the musicals I’ve reviewed, but one of the first ones was My Fair Lady at the University of Central Oklahoma! It’s been a wild ride ever since here at OKASH.

I’m so excited you’re here!! My favorite theatre to cover is University Theatre, especially my alma mater UCO (GO Bronchos!). But we cover everything, all the way from High schools to Broadway tours, and even the occasional out of town show. Come, browse, read some, or read all!!

I am a lifelong theatre lover! This opportunity has turned two passions into a career and I love every second of it. If you meet me, I’ll try to find out what your favorite shows are. And if you can’t name any, I’ll help you find yours! Let me tell you about mine! 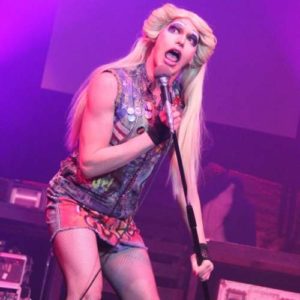 Jared Blount in The Pollard Theatre’s 2017 production of Hedwig and the Angry Inch.

HEDWIG and the Angry Inch: Hedwig isn’t the most popular show, but it has a unique following that has persisted for over twenty years. Hedwig is the most interesting, broken, and beautiful character I’ve ever seen, and she’s the reason I am a writer. I’m a PROUD Hed-Head, and any chance I get to see the show live, or watch the movie, or listen to the music, I will, usually with my blue eyeshadow and Hedwig outfit on! Any time I can introduce a new fan to this amazing story is a good day for me. Hedwig truly changed my perspective, not just on theatre, but on life. My favorite podcast to listen to is called “Hedwig: Inch by Angry Inch”. It’s hosted by a sassy Brit named Jonfen and they break down the movie version of Hedwig chapter by chapter. Give it a listen, I’m on the first episode! 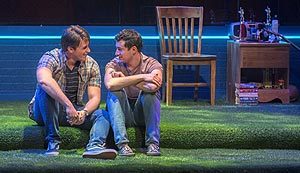 GIRLFRIEND: I saw Girlfriend in 2019 at Lyric Theatre of Oklahoma, and like Hedwig, it changed my life instantly. It’s a sweet, simple story about two recent high school graduates falling in love, figuring out their relationship, and coming to terms with their sexuality. It’s such an important story, and a brilliantly written piece of theatre. Todd Almond wrote it and used the music from Matthew Sweet’s ’90s album, Girlfriend, which was actually about a breakup that Sweet experienced. The music, paired with the story, and the ALL-FEMALE rock band, makes Girlfriend one of the best things I’ve EVER seen. It’s a universal story told from a unique, honest, and real perspective. It celebrates first love, with all the awkwardness and nostalgia that it brings up. The dialogue is so relatable, I still hear things in every day conversation that remind me of this show. I truly believe that Girlfriend will always be with me. I think about it every day, nearly a year after seeing it. Only the best art does that. It stays with us. 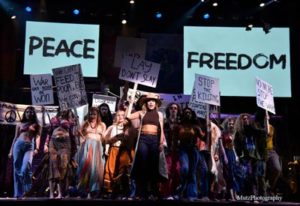 HAIR: What can I say about Hair that hasn’t been said a thousand times already? Hair is iconic. It’s from 1969, but it holds relevance and weight today, maybe even more so now than in decades past. It’s about war and peace, love and anger, fear and hope. Hair lets you experience every emotion you can muster, rips your heart out, and leaves you somehow hopeful. Hair is nothing if not powerful, shocking, and heavy. It’s also hilarious! And the MUSIC. I’m sensing a theme here… YES Hair is THE quintessential rock musical, and without it, the world would’ve never been given Rent, Spring Awakening, or Hamilton. It defined the very idea of protest art, and it’s everything that I think theatre should be- thought provoking, important, and bold. It shies away from NOTHING and teaches you what those who came before us learned too well, that in war there are no winners, and we send children to fight grown men’s battles.

The biggest motivator for me when I became a writer for the local theatre scene was that I knew what it felt like when I couldn’t find much info about the shows I wanted to see. I felt deterred more than once because I wasn’t confident going into a show and buying tickets (that’s an investment) when I couldn’t find ANYTHING about my local productions! Now that I’m a writer, it’s still my main motivator. I want to get as much information out there as possible about the WONDERFUL theatre we have here in Oklahoma and in the surrounding communities.

So if you have questions, or you’re seeking information about a specific show, hopefully you can find it here and it’ll inspire you to get out and see some live theatre!! Much love… XOXO