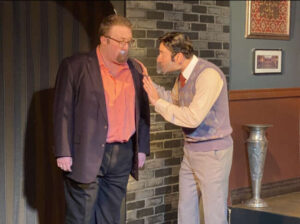 The 3rd Act Theatre Company is presenting “Oxtiern or The Misfortunes of Libertinage” by the infamous Marquis de Sade February 5 through 21.  Dakota Lee Bryant directs a cast of eight in this period piece done in modern costuming.  The choice to set the play is the present is interesting, especially as while the time is over 200 years in the past, the problems are still quite current, it is only perspective that has changed for the better.  Today, we pretend to respect others, whereas in the past the pretense was only of innocence in wrong doing. Donatien Alphonse Francois, notorious as The Marquis de Sade made his mark on history due to his decadence in behavior and philosophy.  He was a libertine–finding enjoyment in sexual dominance and violence.  The term sadist is derived from his name.  He was also a gifted writer, although much of his work was never published and many works were destroyed by family members after his death.  Surviving works, including numerous conventional plays, reveal a brilliance, dimmed only by the shocking ideas he proclaimed.  His work reflected his opinions politically and socially.  Clearly, he was also as sadistic as any predator carrying the stigma of sadism in his activity.  “Oxtiern or The Misfortunes of Libertinage” was first presented in 1791 amidst great civil unrest.

“Oxtiern” is clearly somewhat autobiographical in nature, but tame enough for presentation to mature audiences.  The play tells the story of a beautiful damsel in distress, Ernestine Falkenheim, who falls victim to a conniving predator.  This evil shark is none other than Count Oxtiern who believes totally in complete freedom unrestrained by morality, in short, a libertine.  Ernestine is taken along with her companion, Amelie, to the inn of Fabrice, where the dastardly Count plans to join her.  Fabrice is appalled by the behavior of his acquaintance Oxtiern and wishes to thwart the plans to destroy Ernestine’s virtue.  Casimir, valet to Count Oxtiern has arrived ahead of his master, and he also exhibits some distress at the extent of Oxtiern’s depravity.  Count Oxtiern eventually arrives and is met by his friend and associate, Derbac.  As the action progresses Derbac is ultimately repelled by the vicious plot as well. 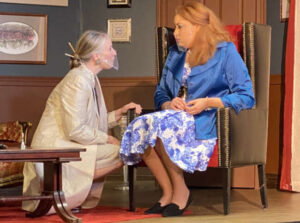 Ernestine has developed a plan to restore her freedom if not her good name.  Oxtiern has not only used her cruelly he has participated in the arrest and downfall of her true love, Herman.  Further, Ernestine’s father, Colonel Falkenheim arrives filled with resolution to rescue his daughter. The play runs a course with all the gyrations that can be expected in this period of intrigue and revolution.

Two and a half centuries’ have passed since this era of violent upheaval.  The revolutions that came in France (1789) and America (1776) fostered new ideas about government and culture.  It is the cultural revolution that makes the infamous 60’s in our recent history seem a little tame.  The Marquis de Sade had controversial beliefs about what conduct is appropriate, and many of his ideas are quite acceptable today.  What we don’t accept today, and what is a problem revealed in “Oxtiern” is the important of consensus.   The abduction of Ernestine is not a liberating event for her.

In this time period the dress, manners and language are more precise than today.  The phraseology of the period is different in cadence from today’s relaxed speech and cannot be updated without being rewritten.  The cast members in “Oxtiern” are hampered by the face masks worn due to the pandemic.  Nevertheless, they deliver with the precision necessary to allow the free-flowing ideas to flourish.  Since Covid-19 ctors are becoming quite adept at projecting the voice around the mask. 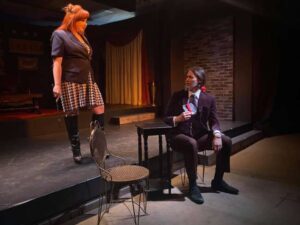 Dani Becker as Derbac and Matt C. Cross as Oxtiern in “Oxtiern or the Misfortunes of Libertinage” Photo courtesy of Dakota Lee Bryant

Taylor Reich is particularly brilliant in his characterization of Fabrice, allowing the play to begin on a very positive note.  His strong characterization of a slightly flustered and well-meaning innkeeper is perfect. Brian Mueller has returned to the stage after a long hiatus and is excellent as Casimir.  These two actors are superb at setting the stage for the action to come and most importantly the ambiance.

Kat Adam is becoming familiar to 3rd Act audiences as a favorite.  Her skill is vibrant and she portrays Ernestine with the rebelliousness of a modern woman and the deference of the era which assists in bridging the two periods.  Denise Hughes plays her companion, Amelie,  with her usual consummate skill.  Together, they bring the relevance of the story into sharp relief and understanding. 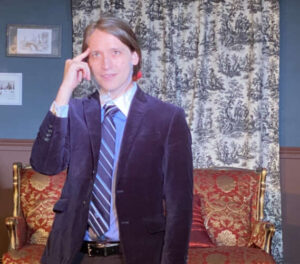 Matt C. Cross plays the villain, Count Oxtiern, admirably.  He exudes the sense of privilege Oxtiern presents expertly in spite of slightly ill-fitting costuming.  His villainy is apparent, yet easily hidden by his charming façade.  Cross captures the duality with ease.  From his first entrance he embraces the villainy, the charm is only evident in the twinkle of an eye, yet we can see how Ernestine was taken in prior to her abduction.

Dani Becker is friend Derbac and she strikes exactly the right note of obligation to the Count.  The two reveal a compelling dynamic of shared interests and beliefs that Count Oxtiern depends upon.  His inability to recognize when he has taken things too far is highlighted by Derbac’s eventual rebellion. 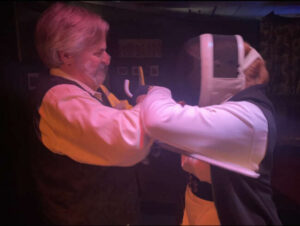 Edmund Gert as Colonel Falkenheim duels with the dastardly Count Oxtiern not realizing it is in fact a mystery. The identity of his actual foe is revealed in the show. Photo courtesy of Dakota Lee Bryant

Edmund Gert is Colonel Falkenheim, the loving papa, possibly a little inattentive to his daughter’s wishes when he forbid her to marry Herman.  He must now make up for that failure.  He prepares to fight a duel with Oxtiern and this decision is pivotal.

DeShawn Young is Herman, the young man who loves Ernestine.  Released from prison he arrives at the most opportune moment to claim Ernestine, and impress a future father-in-law.  Young also plays Charles in this production.  The characters are similar yet well delineated by Young.

Dakota Lee Bryant shows great directing skill in this show.  As costumer, he is a little short of his usual excellence as some of the costumes are in-appropriately fitted.  It shows.  Don Taylor’s set design is always superb and Amandanell Bold handles both sound and lighting expertly.  Michelle Hall designs props along with stage managing and Peter Fischaber lends invaluable assistance as the Fight Choreographer. Joe Burleigh is always where he is needed off stage as well as on.

“Oxtiern or The Misfortunes of Libertinage” runs through February 21 at 3rd Act Theatre.  Located in the Shoppes at NorthPark Mall, the address is 12040 North May Avenue.  For information about this show, visit www.3rdacttheatreco.com or call 405-593-8093.  The theatre has limited seating to allow for social distancing easily.  There are no concessions during the pandemic, and of course everyone is wearing masks.  Bryant, his cast and hard-working crew have done a superb job of creating quality theatre sho 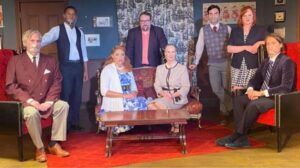 wn live with extremely cautious and effective management during the Covid-19 pandemic.