Neil Simon has been entertaining audiences for decades with his comedic sense. His characters are found in improbable but plausible situations that are ripe with humorous potential and wonderful zingers. “The Odd Couple” has been a fan favorite since the 1965 Broadway premiere starred Art Carney and Walter Matthau, who reprised his role as Oscar for the 1968 movie hit with Jack Lemmon as Felix. Subsequent casts have included Jack Klugman and Tony Randall (TV series) and many other talents in professional and community theatre. Now presenting this beloved comedy are the stars of the 3rd Act Theatre, running through August 24, 2020.

This production of “The Odd Couple” is directed by Christine Jolly. Jolly has an extensive theatrical background in the Oklahoma City metropolitan area and is one of the founders of 3rd Act Theatre. She has played the roles, managed the stage, and assisted in numerous productions at the beloved late Jewel Box Theatre. Discovering that this is her first time as a director is astounding as she clearly knows exactly what to do and how to do it. Her cast consists of seasoned actors and is a very interesting combination of characters. 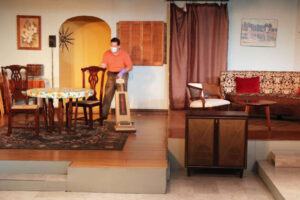 “The Odd Couple” is about two friends who are polar opposite types as roommates. The two divorcés continue with their weekly poker game, but living together is a nightmare, much like their previous marriages. Felix is a compulsive neat-freak and Oscar is a happy slob who sees the floor as both his closet and trash can. It is easy to see why neither of them could find a woman to put up with their idiosyncrasies, so how they put up with one another leads to hysterical hijinks!

Their poker buddies and the sweet young things in the upstairs flat are delightfully flummoxed by the discord between Oscar and Felix. Chris Rodgers is excellent as a slob, understanding the impulses that make a man destroy the hard work of a dedicated friend spending day after day cleaning up after him! Ed Spinelli’s Felix is about as persnickety as they come and his martyred attitude as he labors for perfect presentation in his cooking and housekeeping is about the most frustrating thing a woman could put up with, much less a man who is a slob like Oscar. These two had marriages that were not made in heaven and as roommates they are clearly the result of a diabolical and demonic sense of divine humor. 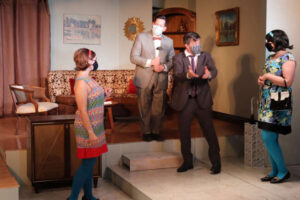 The sisters living in the flat upstairs are from England with accents and assets that charm Oscar as they are charmed by Felix. Oscar desires them; Felix needs them, so of course they cause even greater discord in this living arrangement. Brooke Howard is Cecily and Caitlin Cairns is Gwendolyn. These two play sisters with real feeling, intellects, and experiences. Are these ‘pigeons’ gold-diggers with a great shtick or sincerely stereotypical ‘broads’ as Oscar would call them? Either way the audience is as smitten as Felix and Oscar.

The five poker players are all uniquely suited in their roles as typical men of the fifties and sixties with their weekly poker night. They are Edmund Gert as Murray, Jim Clark as Vinny, Derek Kenney as Speed, and Grant Brittan as Roy. These four are all veterans of the theatre community and bring a great deal of humor and diversity to the show.

Jolly’s excellent directing is accomplished with a little help from a well-chosen crew. The production staff includes Michelle Hall as Stage Manager ensuring that all runs smooth, Michele Fields as Board Liason (a necessary function not always delegated) Amandanell Bold, Sound Designer, Lighting Designer and clear Mask creator/designer. Costumer J. Christine Lanning brings flair to all in the production but especially with the style in the sisters’ wardrobes! On the crew is Nanci McMullin, and Brance Lanning skillfully organizing Oscar’s mess every time Felix cleaned! And of course the Set Designer, Don Taylor does double duty as Jolly’s Production Angel. This is an unusual position in technical circles, but clearly, every director should have a production angel! 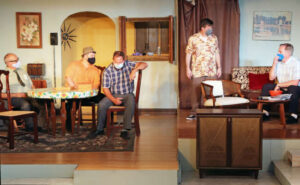 “The Odd Couple” plays through August 23, 2020 at 3rd Act located at 12040 N. May Avenue in the Shoppes at Northpark Mall. Curtain is 8:00 pm and there are two intermissions, although the evening goes fast with the quick witted delivery from the actors. All actors, crew, box office and patrons are required to wear face masks, but this doesn’t make it hard to understand what’s happening. The actors are in clear face masks, that are completely unobtrusive, and one forgets they are even wearing them! For tickets and information visit www.3rdacttheatre.com or check out their Facebook page. By phone the number is 405-593-8093. With these uncertain times it is wonderful that our community theatre is able to be active with the resources to practice full social distancing and mask protection along with their deep cleansing efforts. Concessions are closed for this reason. The 8 cast members of “The Odd Couple” and the production staff of 10 are here to give us time to relax and enjoy but mostly to laugh!